There is a lot of conflicting information on this family. I have sifted through it and I am posting what makes sense to me. Please do not hesitate to propose different facts – leave a comment or message me. I do not feel sure about the facts here, but I wanted to put something out to start a conversation.

Robert Huntington Parks was born about 1810 in Tennessee, probably in Washington County. He is the son of Philip Parks and Katherine White.

R. Andes was born about 1824 in Tennessee according to the 1850 US Census. But who is she? She could be Ruth Andes, daughter of William Andes and Lavina Maria Fine. William’s will of December 1856 in Washington County, Tennessee lists his children as: Mary Parks (but our Mary Andes Parks died prior to 1841), Barbary Walter, Allen Andes, Rebecca Davis, John J. Andes, Abraham Andes, Catherine Leach, William D. Andes (who married Robert’s sister Katherine Parks) and Ruth Parks.

But let’s back up.

Robert married Mary Andes on March 17, 1831 in Washington County, Tennessee. My only record of her is the marriage record, so I do not know when or where she was born or who her parents were. Robert and Mary had at least 4 children, 2 born in Tennessee and 2 born in Kentucky. Mary died by 1841.

R died sometime after the 1850 US Census.

Robert married Prudence Cheek in Arkansas. She was widowed by Leonard Coker and had at least 5 children.

This letter, shared with permission from Brenda Parks Smith (brendas88@comcast.net), was written to Robert Huntington Park’s son Phillip in Illinois, and obtained from his line:
“Father’s family is all well at this time. He said to tell you that he would be glad to see you once more in life for he was getting very old and was not very stout. I think you ought to come and see pap for he has him a young wife to squeeze whenever he feels like it. John and his family are well and wants to see you very bad. Write all of us and direct your letters to Lead Hill by way of Forsyth.
John Parks, PH [Phillip Henry] Parks, JR [James Robert Coker] Parks, RH [Robert Huntington] Parks and family, there is a few more names but no paper”

It is thought that Robert died in 1873 in Lead Hill, Boone County, Arkansas at age 63.

The children of Robert Parks and Mary Andes:

William Parks – William was born February 12, 1832 in Tennessee. He married Melissa Jane Baker in about 1858 and they had a daughter, Zoe. William was killed by bushwackers on August 17, 1862 in Berryville, Carroll County, Arkansas. He was 30.

John Henry Parks – John was born November 1, 1835 in Woodford County, Kentucky. Served in Civil War. According to his tombstone, he was a 3rd Sergeant with Company C of the 3rd Texas Artillery, Confederate States of America. He married Mary Elizabeth Morris in 1873. They had 4 children. He died April 17, 1906 in Taney County, Missouri. He was 70. His Find A Grave memorial is here.

Here’s a story shared by Nadia Valeria Parks Martin on Ancestry.com:
“John H. Parks was born Nov. 1, 1835 in Woodford County, Kentucky.  He was the third son of Robert Huntington Parks.  His mothers name is not known to me at this time.  John’s family moved to Taney County, Missouri sometime before the Civil War.  John served in the Civil War and was paroled (discharged) on June 7, 1865.  He was injured in the war and had a small metal plate in his skull.  This piece of metal made him have bad headaches.  He lived over 41 years with this plate in his head.  He married Mary Elizabeth Morris in 1873 when he was 39 years old and she was 22 years old. Mary Elizabeth was in love with John’s younger brother, Henry.  Henry died suddenly with pneumonia and she grieved over his death.  John’s sister, Mary Ann Parks Taylor, told that Liz would go to Henry’s fathers home, take Henry’s hat off the wall where it hung, hug it and cry.  When John H. came home from the war, Mary Elizabeth (Liz) said, “Henry died and I can’t have him, but I’ll get a Parks yet: so I’ll marry John.”  She did, but it took her about 9 years to catch him. ”

I think the Henry she is speaking of was H.W. Coker Parks, born in 1851 to Prudence Cheek and Leonard Coker, who disappeared after the 1870 US Census. If this is the case, Henry was not dead when John returned from the Civil War. There is not another potential Henry on a Census with Robert Huntington Parks. 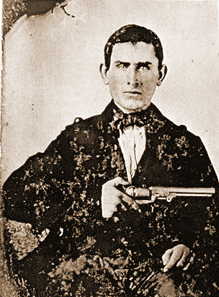 The children of Robert Parks and R Andes:

Abraham B. Parks – My 2X great grandfather Abraham was born in March of 1842 in Tennessee. He married Eady Anne Alley (maiden name Cane) on September 6, 1866 in Shelby, Illinois. They had 2 children. He married Mary A. Kilman in 1883. They had 4 children. Abraham died December 4, 1900 in Boone County, Arkansas, according to Arkansas Confederate Pension Records. He was 58. He is buried in Cedar Creek Cemetery in Cedarcreek, Taney County, Missouri. His Find A Grave memorial is here. Read about him here.

The children of Robert Parks and Prudence Cheek Coker:

Mary Ann Parks – Mary Ann was born February 8, 1865 in Arkansas. She married George Washington Taylor in about 1882. They had 7 children. She died October 3, 1951 in Slaton, Lubbock County, Texas. She was 86. Her Find A Grave memorial is here.