Anna Elizabeth Galloway was born February 9, 1834 Kentucky. I don’t know who her parents are.

William and Elizabeth married, and had their first child in 1852.

Elias married Mary Catherine Nauman Martin in 1895. She had been widowed, and had 9 children.

On January 31, 1908, an article printed in The Holt Sentinel (Oregon, Missouri) that read:

Tuesday last E. W. Browning bought a stick of phosphorus, intending to use scrapings off it with molasses, as a rat poison. He put it in his coat pocket and went up the street. Fifteen minutes later, in front of the post office, the phosphorus suddenly flamed and in an instant his coat, blouse and outer shirt were ablaze. His sons W. A. and W. E. who were talking with him at the time instantly tore these outer garments off and threw the blazing pieces away. Mr. Browning, Sr. was not burned except upon one finger, but both sons’ hands were badly blistered. Walter’s right hand suffered most and cannot be used for some time. Had the phosphorus not ignited until Mr. Browning was in his wagon and on his way home alone, the affair would probably have resulted in a tragedy.

Elias died on May 10, 1910 in Craig, Missouri. His Find A Grave memorial is here. He left a will that unevenly divided his assets amongst his children and was contested by his oldest son, John Francis Browning. I will write more about this soon.

The children of Elias & Anna are:

William Allison Browning –  William was born on March 19, 1858 in Holt County, Missouri. He married Julia May on November 29, 1883 in Holt County. They had 5 children. She died in 1898. He married Katie Bain in about 1901. He spent his life farming in Holt County. He died on His Find A Grave memorial is here.

Isabel Browning – Isabel was born on March 28, 1860 in Holt County, Missouri. She married Archie Sharp. They farmed in Holt County, and had 2 children. She died on August 5, 1895 in Holt County. Her Find A Grave memorial is here.

Florence Letta Browning – Florence was born on March 2, 1862 in Holt County, Missouri. She married Thomas Milton Hopkins in 1880. They had 8 children. They farmed in Holt County, Missouri; and Phillips County, Kansas. She was widowed in 1928, and moved to Nebraska to live with a son. She then moved to Colorado, and finally back to Phillips County, Kansas to live with a daughter. She died on April 17, 1940. Her Find A Grave memorial is here.

Emma Browning – Emma was born on She married Daniel H. Bertram on September 10, 1891 in Holt County, Missouri. They moved to Nebraska had 6 children but only 2 lived. Daniel was a carpenter, and then a hotel owner. I lose track of them after the 1940 US Census, and can’t find a death record for either of them.

Minnie Browning – Minnie was born on October 8, 1877 in Holt County, Missouri. She is the twin of Linza Carroll. She died November 7, 1880. Her Find A Grave memorial is here. 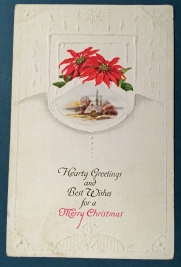 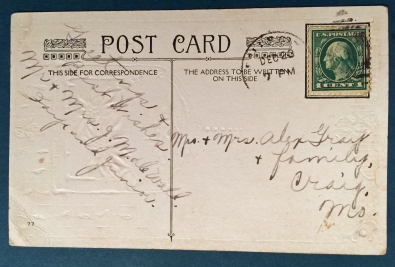 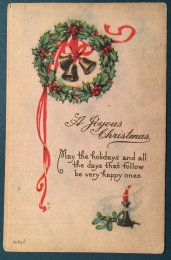 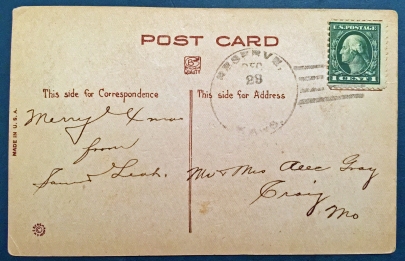 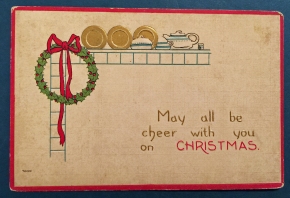 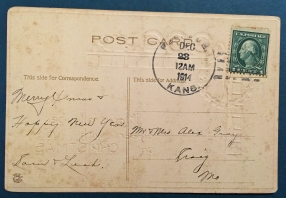 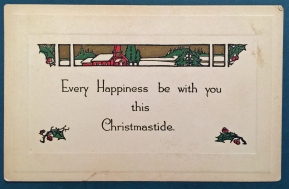 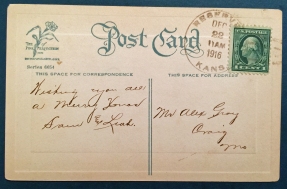 Wishing you all
a Merry Xmas
Sam & Leah 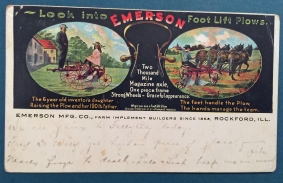 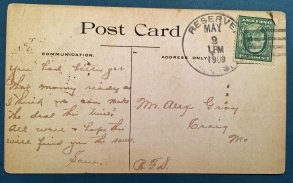 Front reads:
We are going to Falls City today.
Fred DeWald got hurt on piece of glass
nearly froze to death. Lula and Leah keep me on wood pile.

Back:
You had better get
that money ready as
I think we can make
the deal this time.
All well & hope this
will find you the same.
Sam

Frederick DeWald (1883-1944) is Leah’s brother who, along with his parents, live in Falls City, Nebraska.

Lula is Lula Gray (1881-1973), daughter of Alexander and Rose. Lula and Leah are cousins, and Lula must have been visiting the Stewarts at the time this was written.

I suspect Lula met her future husband while visiting her cousin Leah. Sam and Leah lived next to Allen E. Bowersox (1872-1966) and his first wife Cora VanKirk Bowersox (1872-1929) in Reserve, Kansas when this postcard was written. Allen later was divorced from Cora, and married Minnie Rowe Bowersox (1872-1930). He then married Lula Gray sometime between 1930 and 1935.