George F. Hickman was born about 1820 in Mason County, Kentucky, and I’m trying to figure out who his parents are.

Lamira Clift was born January 16, 1825 in Mason County, Kentucky. She is the daughter of Abner Clift and Mary Robinson. Read about them here.

George and Lamira were married on August 12, 1851 in Mason County, Kentucky.

The Hickmans are said to have lost everything in the Civil War. Their slaves (actually the slaves owned by George’s mother-in-law Mary Robinson Clift) were set free, and the family moved to Holt County, Missouri after 1867 when their youngest son Joseph was born. Todd’s dad Lanny remembers his mother Edna telling about her grandfather, George & Lamira’s son Abner, saying that before they set out for Missouri one of their slaves took his little pair of boots and gave them to her son. According to the Slave Schedule for 1860, there was a 4 year old male slave in the household, and Abner was 4 years old too.

George died sometime after the 1880 US Census.

John H. Hickman – John was born October 25, 1859 in Mason County, Kentucky. His Missouri Death Certificate lists him as single and working as a cook at a hotel. He died April 3, 1933 in Holt County, Missouri. His Find A Grave memorial is here.

Joseph Clark Hickman – Joseph was born on August 31, 1861 in Mason County, Kentucky. He married Maude Long. He died on August 14, 1952 in Craig, Holt County, Missouri. His Find A Grave memorial is here.

Mary “Mollie” G. Morgan was born on March 25, 1864 in Missouri. According to her Missouri Death Certificate, her parents are William Morgan and Mary Smith and they were both born in Kentucky. Later on the US Census, Mollie reported that her father was from Tennessee and her mother from Missouri. I haven’t been able to find them, so I don’t have record of Mollie until her marriage to Abner.

Mollie died on November 27, 1918 in Buchanan County, Missouri. Her Find A Grave memorial is here.

On the 1930 US Census, Abner was 74 and lived in Douglas County, Colorado, with daughter Letha, age 45; her husband Carlos Gelvin, age 46; and their children Avis, age 19; and Frank, age 13; plus Carlos’ widowed mother Callie Gelvin, age 70.

Abner died on March 23, 1933 in Douglas County, Colorado. His Find A Grave memorial is here.

Letha Hickman – Letha was born on July 8, 1885 in Tarkio, Missouri. She married Carlos Arthur Gelvin. They had 4 children. Carlos farmed, and then owned a gas station. Letha died on January 24, 1950 in Richland, Washington. Her Find A Grave memorial is here. 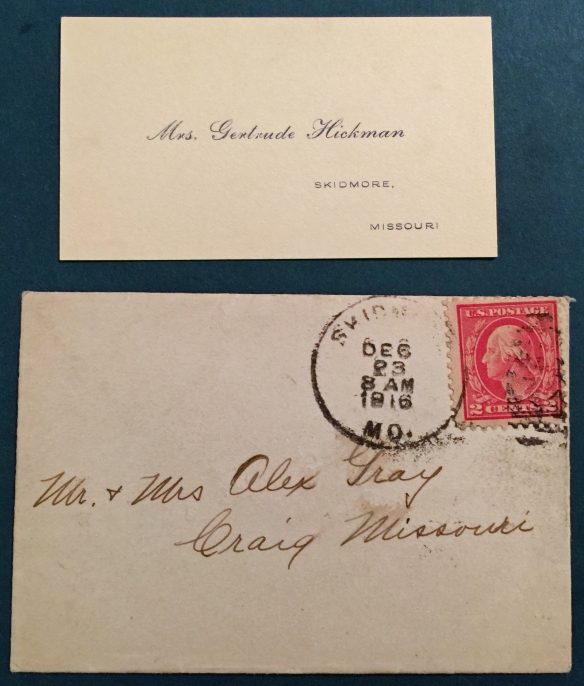 My father-in-law Lanny Gray would very much like to break through the Hickman brick wall, and I hope to work on it more soon. Here’s what I have (mostly unsourced) of our Hickman line, which starts with Lanny’s mother:

I’d love to hear from anyone with information on George F. Hickman. I have copies of both Gone Home and Gone Home Vol. II so if you’d like me to look something up for you, please contact me.