My grandfather Wallace Paul Cowan (1903-1988) left lots of photos of his Hinson side of the family. His mother Myrtle Bertie Hinson (1879-1971) had seven siblings who lived to adulthood, and I have photos of most of them and their children. I’ll be doing a post on each of them. I shared earlier about Dock Newton Hinson, and soon will share information about his father, Bertie’s brother Thomas Mack Hinson (1872-1945).

Lin is the son of Isaac Newton Hinson (1849-1925) and Louisa “Cumi” Harp (1852-1918). You can read about their family here. The 1910, 1920 and 1940 US Census lists his birthplace as Arkansas, but his obituary (Springdale News, October 20, 1952) says he was born in Wichita Falls, Texas. (This obituary misnames his mother as Nancy Harp Hinson, and misspells his name as Lynn.) His World War II Draft Registration Card also lists his birthplace as Wichita Falls, Texas. I suspect something took the family to Wichita Falls, Texas at the time of Lin’s birth, but all his siblings were born in Arkansas.

Lin married three times but had no children. On September 18, 1909 he married Annie Gramling (1888-1941) in Benton County, Arkansas. They were counted twice in the 1910 US Census, first living with Lin’s parents, two sisters including my Great Grandmother, and my grandfather on April 21 in Springdale. On May 2 they were recorded living alone, in Springdale. By the 1920 US Census, Lin and Annie had divorced and Annie lived with her father. A lot happened during that decade – rowdiness and military service – and we will talk about that. Also, Lin’s mother Cumi died in 1918, and his sister Vernie died in 1920.

The military photos I have of Lin are marked on the back in my grandfather’s handwriting saying he is in Mexico, and the dates are a bit off. He did serve in Company A of the Arkansas National Guard and went to Deming, New Mexico (Springdale News 1916: May 19, June 30, July 29, September 15) but not Mexico. From Wikipedia, I learned that the 142nd Field Artillery Regiment served in The Mexican Expedition, against the paramilitary forces of Francisco “Pancho” Villa:

Linn’s obituary (Springdale News, October 20, 1952) says that he served with the 142nd Field Artillery in France in World War I. From the Arkansas National Guard Museum website:

142nd Field Artillery Regiment (originally the 2nd Infantry) was delayed by training as it converted from infantry to artillery.  It sailed for France August 31st and arrived September 7th. The 142nd was certified for combat November 8th, 1918 and the armistice was signed on the 11th, preventing the 142nd from participating in combat.

Before he served the United States on the border with Mexico and in France, he was a wild young man living in Springdale, Arkansas. In my next post we’ll talk about his rowdy life before his military service, and his life after it. 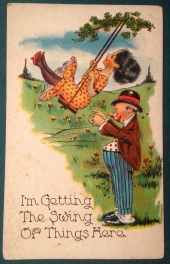 August 15, 1912
Dear Husband,
This is the first
chance I have
to even write with you
since you was
at Sedalia am
well but this is
a lonesome old place
was over in Ok
lahoma yesterday
like the looks of
the country it is
fine with love to
all Rose Gray

Rose Althea Browning Gray was writing from Gravette, Arkansas (Benton County in Northwest Arkansas, about 10 miles from the Oklahoma border) to her husband Alex Gray at home in Craig, Missouri. She is about to turn 58 years old. She was likely visiting her cousin Mary Tolby McNiel.